Exekias and the suicide of Ajax, by Chip Foarde 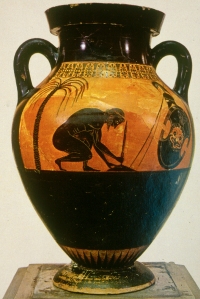 This vase was crafted by the renowned Athenian potter and painter Exekias. Likely a special order, Exekias painted a rare scene: the hero Ajax preparing for his own suicide. Ajax expected to receive the armor of Achilles upon the latter’s death in combat. Instead the armor was given to Odysseus, and this enraged Ajax. In his madness he ostensibly killed his comrades, only to wake up from a dream to find that he had slaughtered a group of sheep. Realizing the implications of his actions, Ajax buried his sword in the ground and impaled himself on it.[1]

What makes Exekias’ depiction of this story special is the fact that he shows us the moment directly before Ajax throws himself on the point of his sword. The hero is in a state of serene determination, as evidenced by his stoic facial expression. Yet despite Ajax’s calm collectedness, the viewer recognizes the tension of the moment. By stretching out this single instance, Exekias creates a mystical state. The contemporary audience would’ve known this story well, and the events that followed the scene on the vase were no mystery. However, by depicting the moment directly before Ajax’s suicide instead of the suicide itself, Exekias puts the emphasis on Ajax, the human subject, instead of the overreaching parable of the story. This vessel was high grade for its day, and would’ve been used at dinner and drinking parties; the picture on the vase is meant to be provocative. The choice of subject demonstrates a society that is beginning to take an interest in themes of emotion and humanity.

In the 7th century BCE, the poet Callinus of Ephesos wrote:

A man, as he dies, should make one last throw with his spear.

It is a high thing, a bright honor, for a man to do battle …

When it is ordained that a man shall die, there is no escaping death,

not even for one descended from deathless gods.

“A man, as he dies, should make one last throw with his spear”. In the case of Ajax, his suicide is this final throw. His last great act is also the one that will take his life. Callinus went on to say, “Often a man who has fled from the fight …  goes his way, and death befalls him in his own house, And such a man is not loved nor missed for long by his people.” Ajax never fled from the fight, but he ultimately failed to receive the love and admiration fit for the hero that he was. Herein lies the source of his rage; Ajax spent his life second to the great Achilles, fighting valiantly alongside him and always content to take the smaller share of the glory. When Achilles died, Ajax expected to be seen as the new greatest hero of the Greek army. Achilles’ armor was a symbol of this crowning, but it was given to the lesser, (if more eloquently spoken) Odysseus. To Ajax this was the greatest dishonor—his comrades having chosen Odysseus’ shrewd charm over his might and dedication. After his outburst, Ajax realizes that it is better to die a hero than to succumb to madness and compromise his heroic status. Ajax kills himself, and by doing so, he dies a hero. For “the great and small alike mourn when a hero dies.”